Just over a year ago we learned that TIME TRIAL would have its World Premiere in competition at the world's largest documentary film festival, IDFA in Amsterdam at the vast 1500 seat Royal Theatre Carré. An early preview in The Guardian called TIME TRIAL "a rage against the fading light" and while the complex production was certainly an experience for us, we hoped that the result of all the hard work would be something very special and looked forward to sharing it with an audience at last! 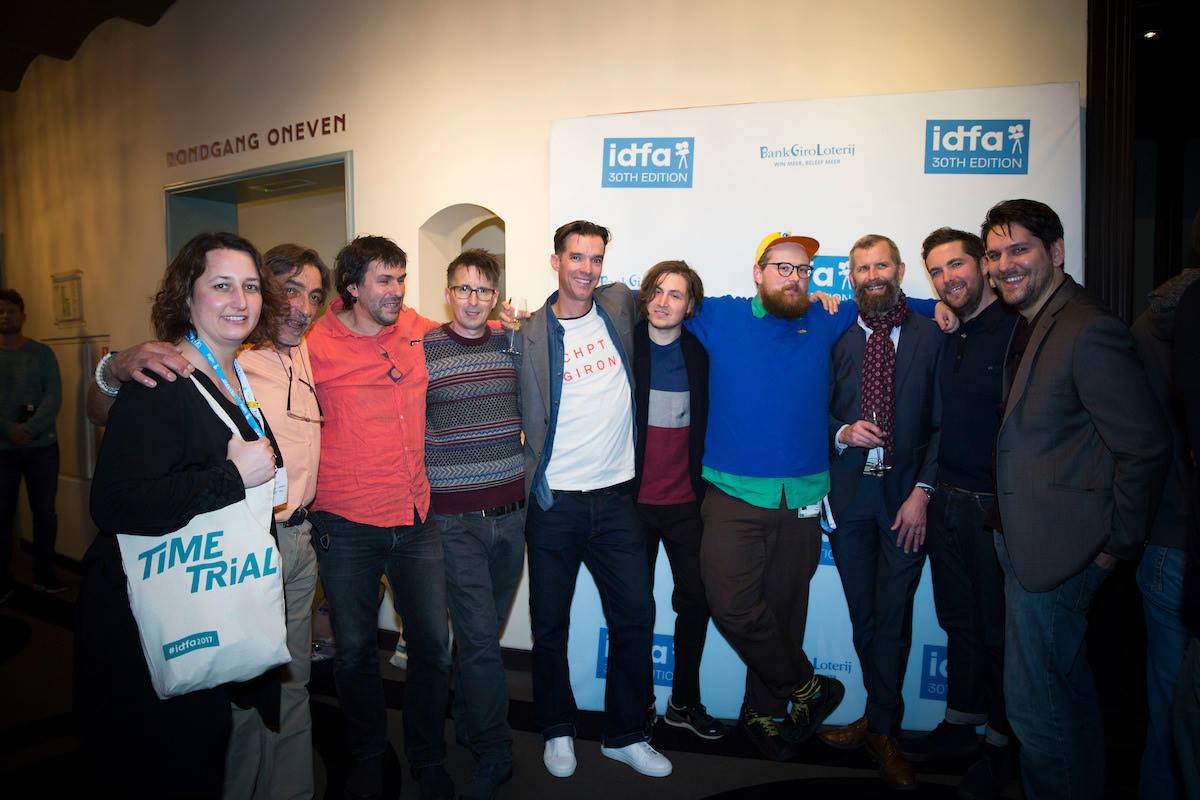 Time Trial crew and David at the World Premiere in Amsterdam. 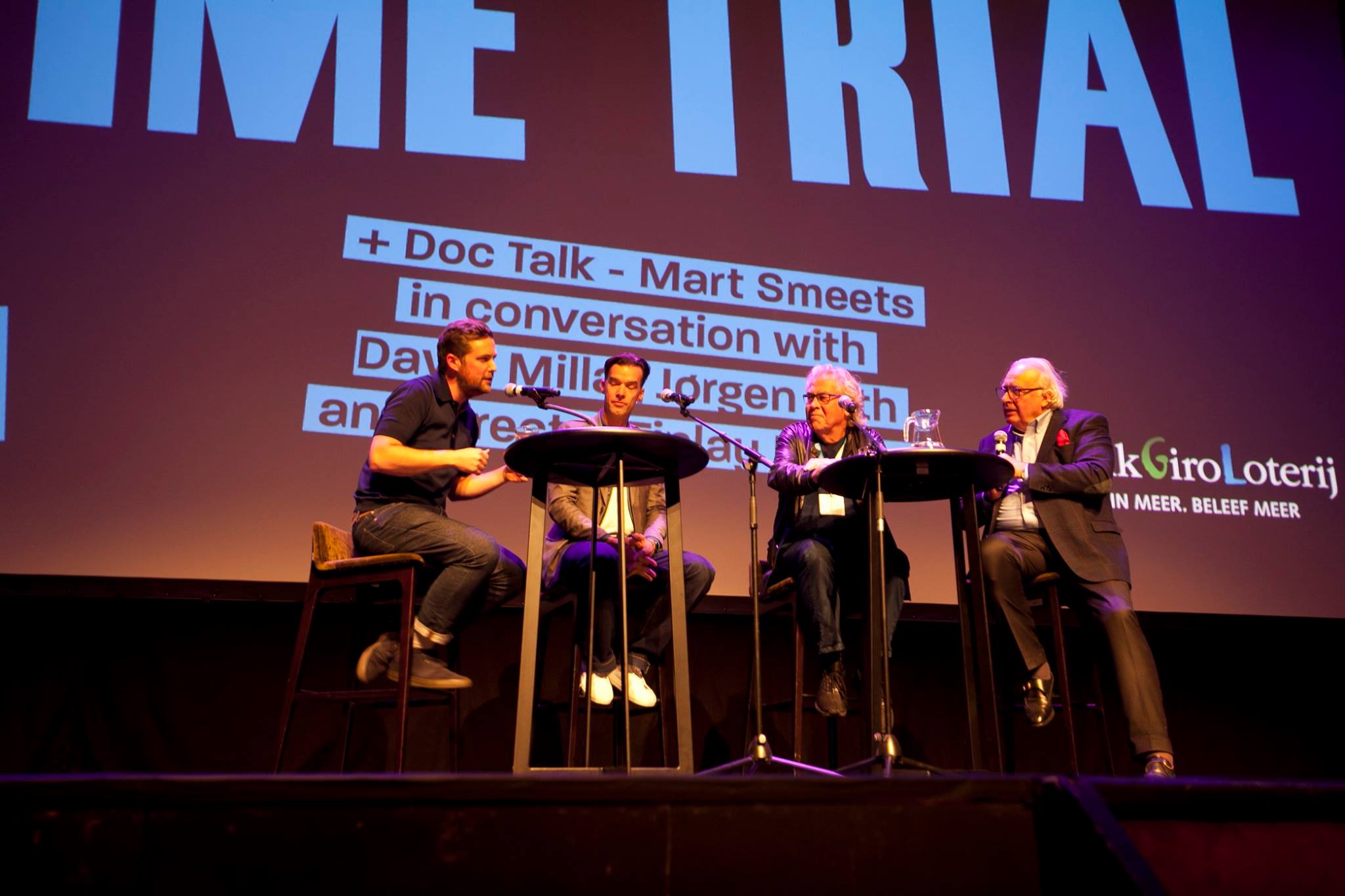 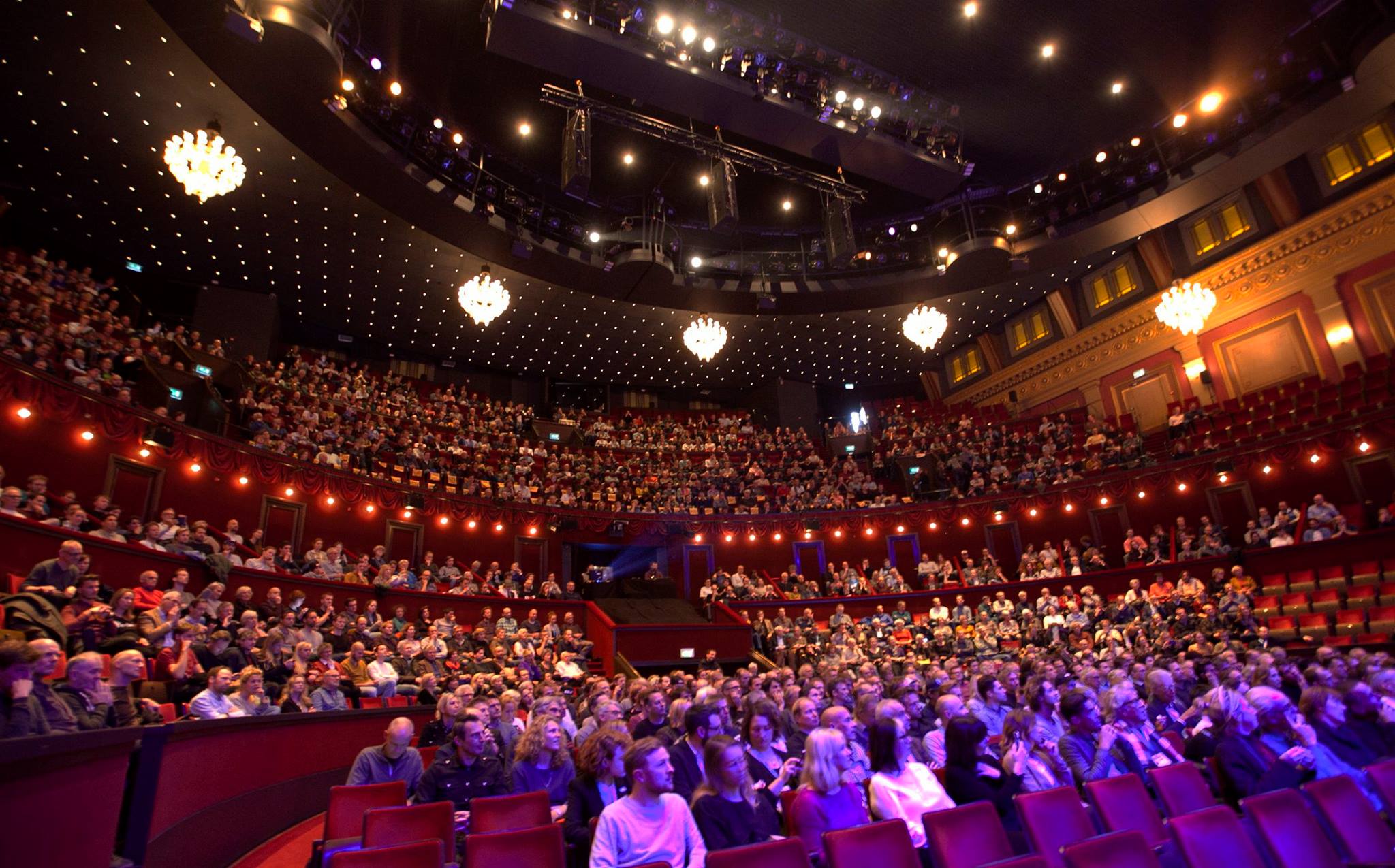 The audience for Time Trial at the Royal Theatre Carré, Amsterdam.

"I wanted to make a film that shows what it’s like to race for people who would never throw their leg over a bike and bike riders alike. I cannot wait to share with such a large audience on its first ever outing!" Finlay Pretsell, Director

The premiere was everything we could have hoped for: an extended discussion between Finlay, David, Jørgen Leth; director of the classic cycling documentary A Sunday in Hell, and long-time Tour de France commentator, Mart Smeets.

We had only just about collected ourselves from the size of crowd in Amsterdam when it was on to our Nordic, Bulgarian and North American Premieres at Göteborg Film Festival, Tempo Documentary Film Festival, Sofia International Film Festival and SXSW, Austin respectively. 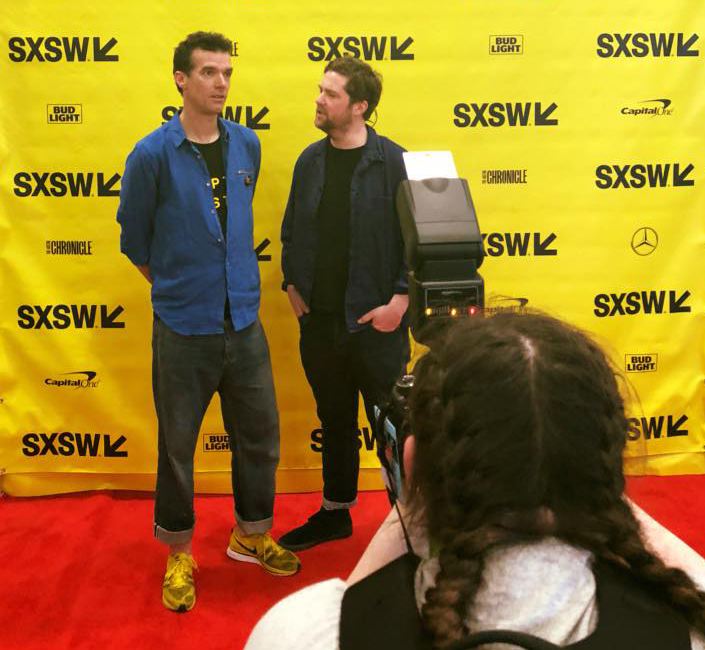 David and Finlay on the red carpet at SXSW, Austin.

After this the festival tour kicked into full-gear and we were off to Copenhagen for CPH:DOX and DOK.fest Munich where we were nominated for a ARRI AMIRA award. We were very lucky to be able to incorporate events with our incredible, infamous composer Dan Deacon into our festival tour with proper full on gigs at SXSW and CPH:DOX.

The British Council caught up with Finlay and Dan to find out what they got up to when they hit music-flavoured film festivals SXSW and CPH:DOX. Hint: It was LOUD! You can read that HERE. 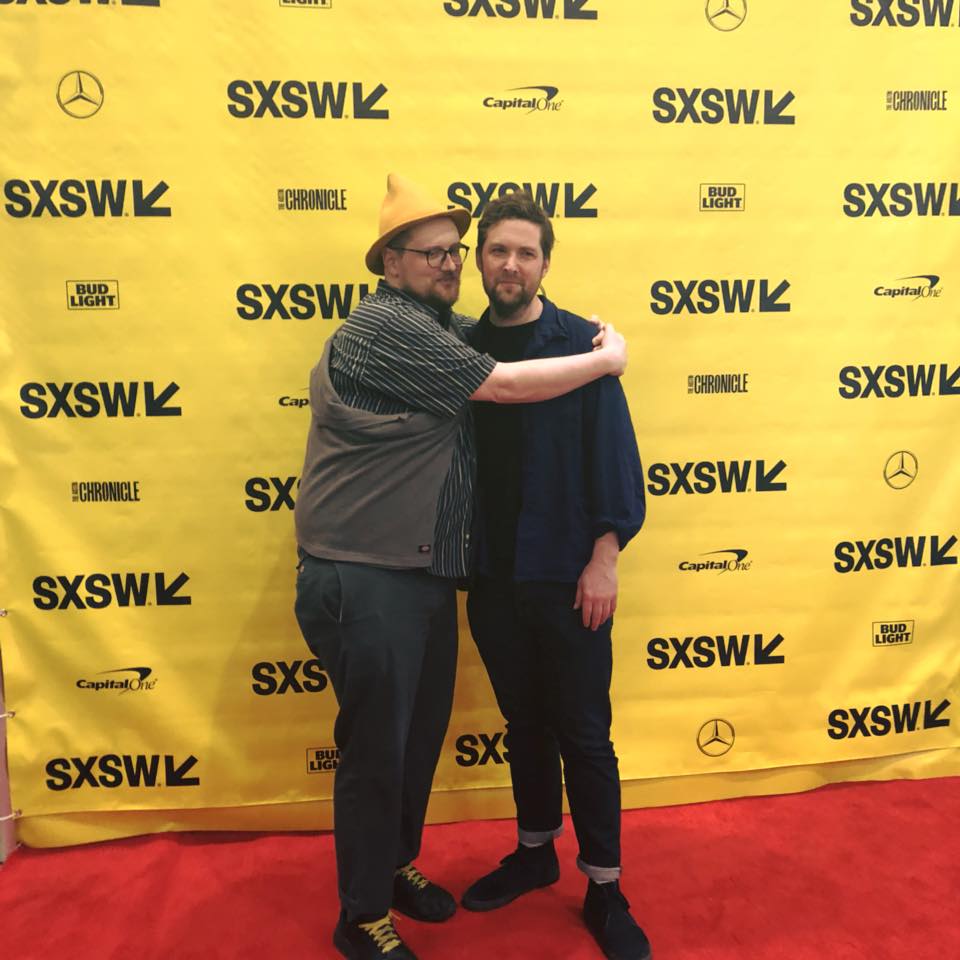 In April we were delighted to be able to announce our summer UK Theatrical run which would immediately follow our joint UK Premieres at Sheffield Doc/Fest and Edinburgh International Film Festival in June, just in time to whet appetites for the Tour de France!

David, Kieran and Finlay at the Scottish Premiere at EIFF.

While all this was happening we also had a pile of international festivals screenings happening all over the world! New Zealand, USA, Russia, Canada to name a few!

Our joint UK Premieres were a pure celebration! Finally we were able to bring the film home and give our long-suffering friends and family a chance to see it on the big screen. That was a big night.

We couldn't have asked for a better opening weekend. Our live Q&A screenings all sold out and we were the best performing film at Glasgow Film Theatre, ahead of Sicario 2! Despite the hot weather, and some air conditioning failures, and the World Cup, this did not seem to deter the crowds. A big thank you to all who came to see the film on the big screen! 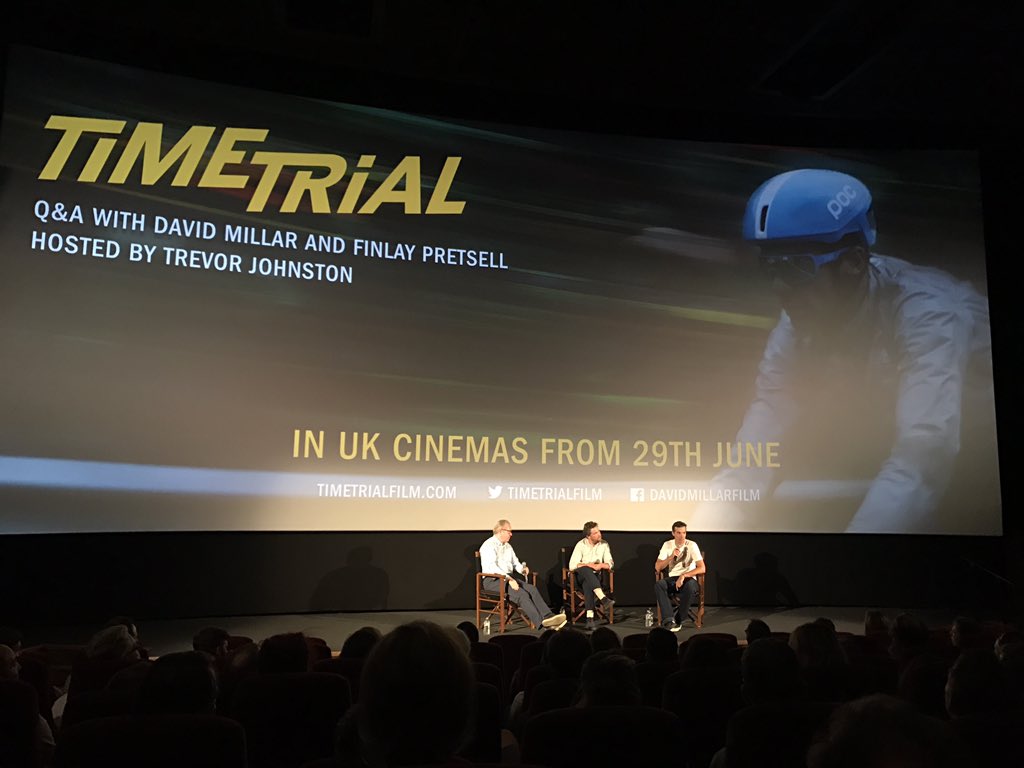 Sight and Sound's Trevor Johnston with Finlay and David at Picturehouse Central, London.

We received some great press coverage with The Independent said "Pretsell’s film takes us far closer to the world of the professional cyclist than any other of the many recent documentaries and features on the same subject" and Little White Lies named the film one of the best new sports docs of the year!

Before David disappeared into the commentating booth for ITV4's Tour de France coverage, he attended a special event in Düsseldorf to kick off the German release of the film.

After our glorious World Premiere in Amsterdam, Cinema Delicatessen picked up the film to show to many more Dutch audiences. Thomas Dekker, Millar's room mate in Time Trial was in attendance, too, for the Dutch release! Find out more. 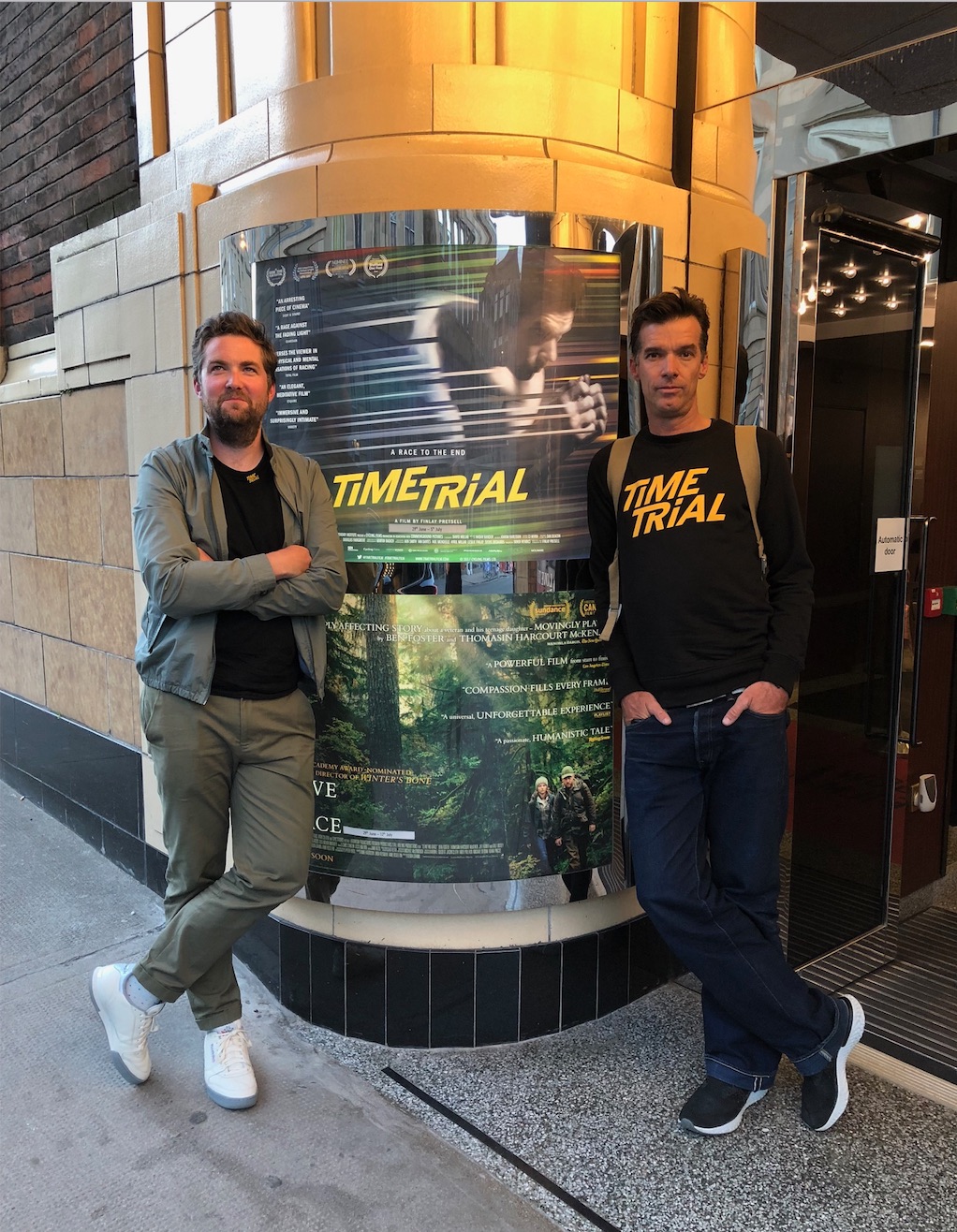 The July theatrical run of Time Trial was a huge success! Taking in the UK, Germany, Austria, Netherlands and Australia, with week long runs in major venues with hundreds of cinemas showing the film it's been by far our biggest cinema release to date and we've loved following everyone's reactions!

The film is also available online and shot up to the #1 spot in both the 'Documentary' and 'Sports' categories on iTunes on its release! Find out where you can watch the film online.

If you have already seen the film and are a certified Time Trial fan, then head over to our shop to pick up limited edition gear that we've created in collaboration with David Millar's CHPT3 line. We have caps, musettes and more for all you aesthetically minded cyclists out there.

At Open City Documentary Festival, Finlay appeared on the Unconventional Characters panel to share his experience making a biopic documentary. He was joined by fellow filmmakers Sophie Fiennes and Pascale Lamche who have recently made films on Grace Jones and Winnie Mandela respectively.

As is always the case with documentary, the story doesn't end when the camera stops rolling... There's been a new twist to David Millar's story! The ex pro-cyclist made a bid to become the president of the pro-cyclists union going up against the - until then uncontested - current president in an attempt to shake up the system. This caused none other than Lance Armstrong to chime in to say that he believes David is the "last person" who should lead the union! The votes came in and David lost, but as ever he stirred up quite a bit of chatter in the cycling world.

By using unprecedented new techniques to capture the atmosphere and experience of professional cycling Time Trial brings you as close to the race as possible. Sound designer CJ Mirra‘s work on the film played a crucial part in that and so we'd like to heartily congratulate him on his well-deserved BIFA nomination for Best Sound! Check out more of his work on his website.

It's now been over a year since Time Trial's World Premiere in the epic Carré Theatre at IDFA 2017, and the film is still making its way to festivals. Finlay travelled to iDocs in Beijing in November where it screened to a fantastic audience, many new to the idea of professional cycling. 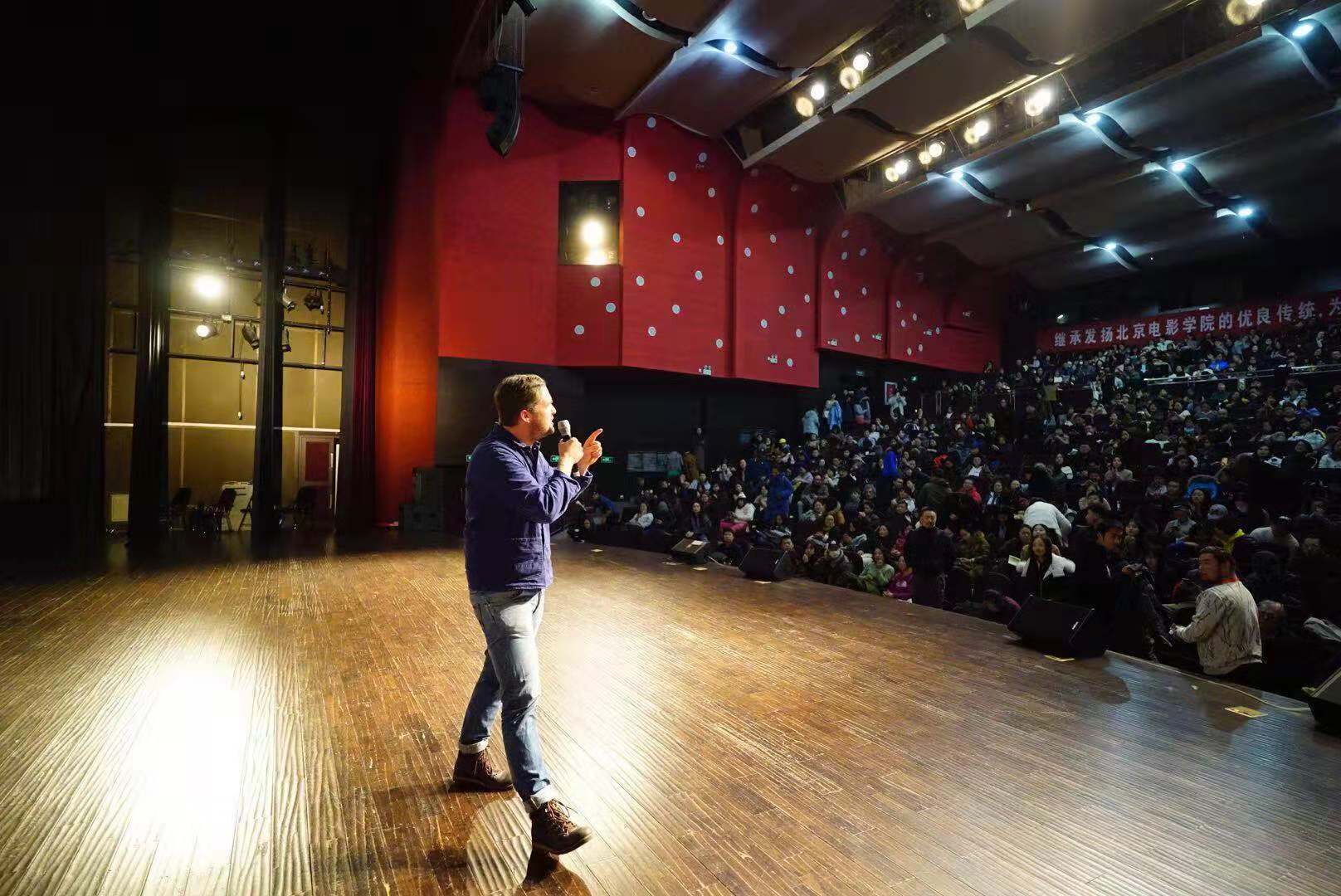 Finlay talking to the iDocs audience in Beijing.

The Time Trial original soundtrack by none other than Dan Deacon has been released! Recently nominated for the "Outstanding Achievement in ​Original Music Score” at the 2019 Cinema Eye Honors, Time Trial OST is not only one of the year’s essential soundtrack releases, but a major work of modern electronic composition. 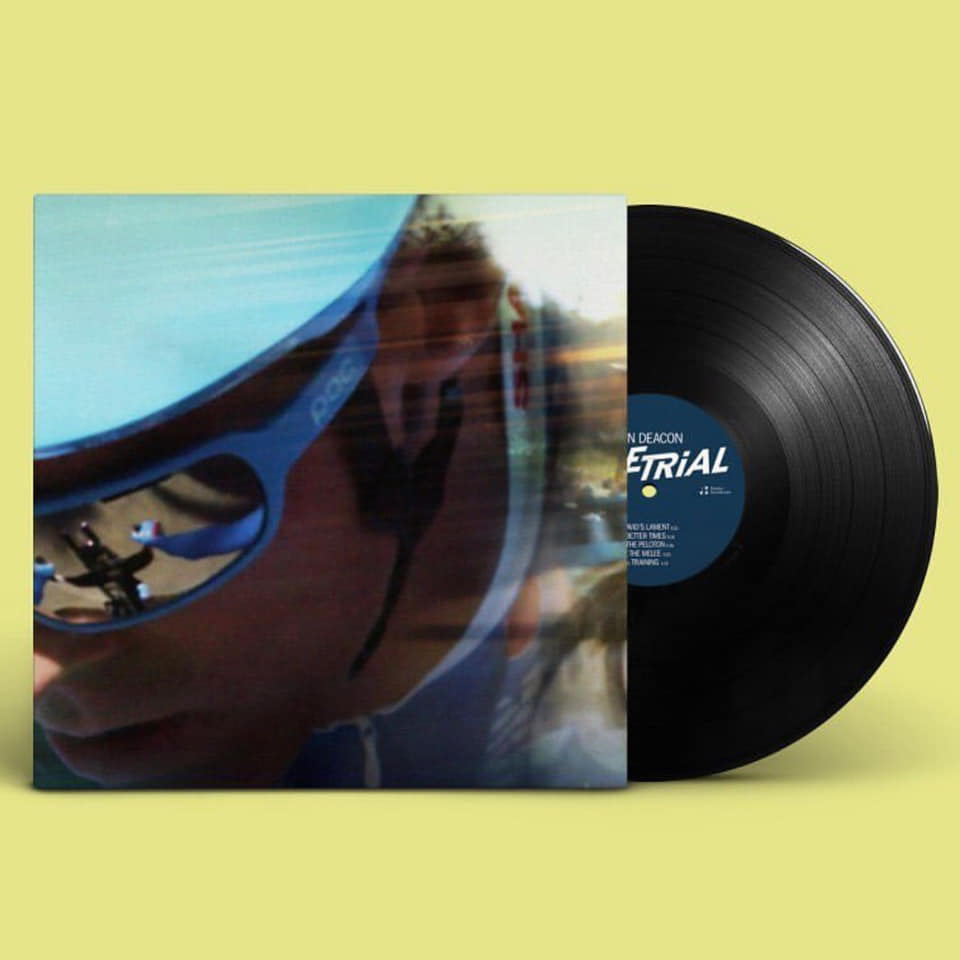 “The film is such an immersive experience, both inside the cycling races and into David Millar's psyche,” says Deacon, “and I wanted the score to have a matching tone. I thought about how David must have felt during those long final rides—to be at the end of a lifelong dream, knowing the ride is over and there are no more tickets for another.”

Time Trial is available to rent or buy online in the UK now!

Just over a year...
See all posts