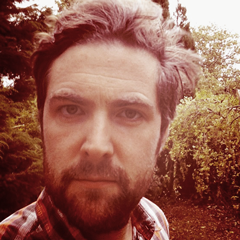 I see cycling in a very different light. To me it is not sport, it is something abstract, physical, mysterious, brooding with intensity but at the same time very elegant.

I am a cyclist. In the past I raced all over Europe, I know the sport intimately. People often talk to me about it - who's going to win this race or that, how many miles have I ridden, what's my power output, what bike have I got? All of this detail does not excite me - they are tools, necessary but irrelevant. The physical and mental feeling of being on the bike, floating through the air, the meditation, but above all the filth and grit of the race, the strength required of mind and body, that is the fascination.

This animalistic experience of the sport is much more exciting and desirable than the sport itself. A mutilation of thoughts and senses of will and desire, suffering and tedium, culminating in an act that transcends what we recognise as bike racing. There is such beauty, regularity and cleanness to these slim, toned bodies of cyclists but with such strength of mind. However cycling is anything but clean: it is dirty and unglamourous and riddled with self doubt.

This film touches the senses. Taking us into a bike race like never before. The perpetual succession of races. I want to create a “hyper-reality”, transferring my feeling of what it felt like to race on that bike, in that peloton.

The chaotic cornucopia of race sounds: gears changing, fans screaming, wind bellowing, constant radio communication with teammates, team staff and race organisers creating a vivid soundscape entirely from David’s perspective. Pieced together from a plethora of race situations an otherworldly anamorphic lens captures and reflect the idiosyncratic qualities of the cyclist. Whether it be talent or just sheer focus and endless training of the mind - a combination of the two. The mesmeric effect of the repetition of the pedal stroke, as David speeds through the omnipresent, menacing and sometimes suffocating landscape.

We discover what it takes to race at this level, what David has come through and, as he nears retirement, where he is going.

The best films are like experiences, they take us on a journey into a world we would never normally have access to. In my previous films I have aimed at making people feel what it is like to be a velodrome cyclist, an aging weightlifter or an institutionalised prisoner. In this film I want to be as close as possible to participating in the race with David.

There is so much we don’t see, hear and feel from the television footage. I want to discover bike racing in its purest sense through David. What I love about documentary filmmaking is that point where your character becomes a collaborator. I am at this point with David, he is involved and invested in this project wholeheartedly. He has given us crucial access to his life and profession. This will set the film apart.